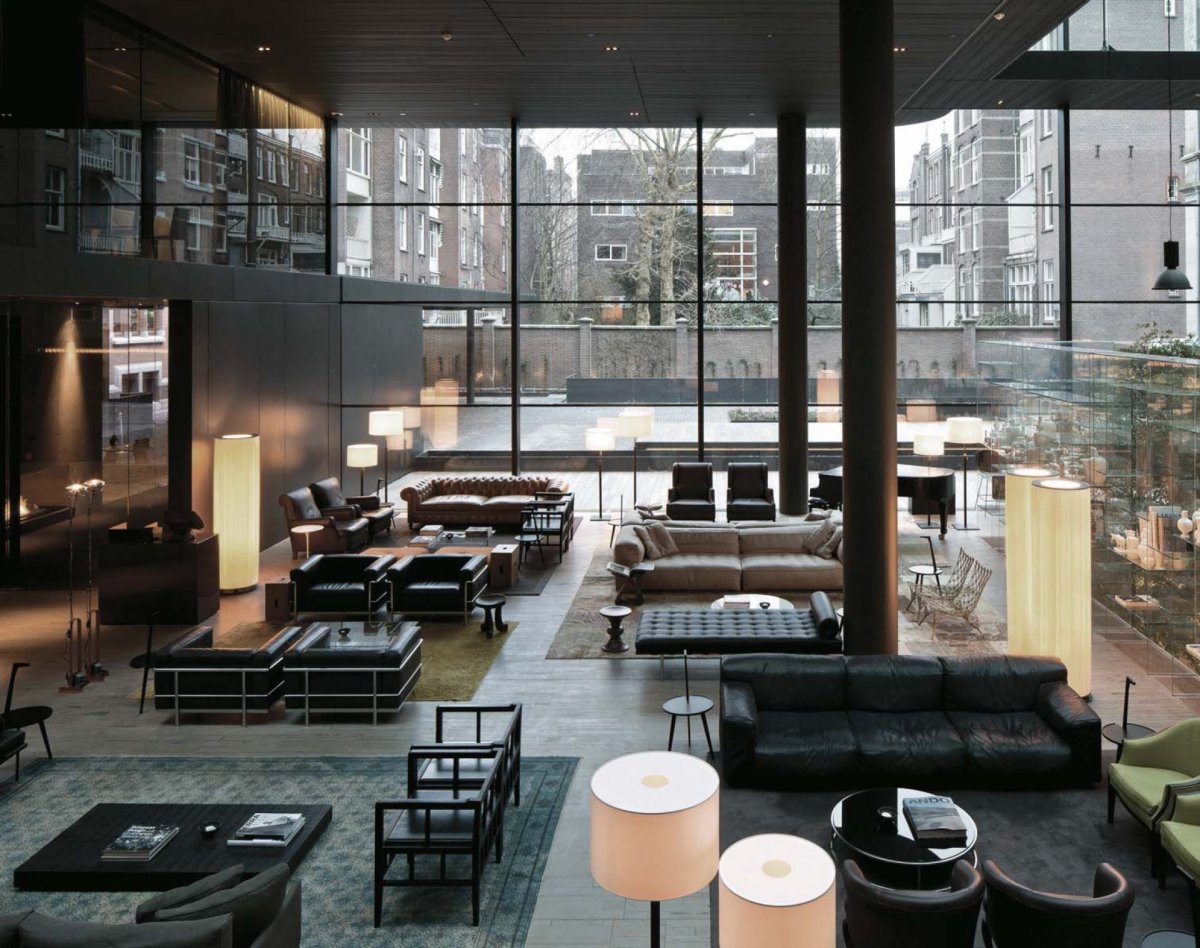 George Akirov knows a thing or two about hotels. The visionary hotelier has built his reputation on building one-of-a-kind wonders and restoring old gems, with his transformation of one of Amsterdam's most iconic buildings falling into both of those categories. Of course, he doesn't do all the work himself - for this project, he hired star architect Piero Lissoni to oversee the reworking of the Conservatorium Hotel Amsterdam, in the Dutch city's cultural heart, the Museumplein. Lissoni's brief was to pay homage to the building's history while adding his own inimitable touches such as the glass-covered atrium and his trademark ubiquitous exposed beams - a must-have for any Amsterdam property hoping to catch the eye of the art-and-intelligentsia community.

Conservatorium Hotel Amsterdam represents the first property of the luxury hotel collection The Set and the ethos of delivering a holistic experience is visible throughout the hotel. It pays tribute to the Amstersam Conservatorium's legacy as soothing classical music sections echo through its vaunted ceilings. Several communal dining outlets - three cafés, restaurants and bars - offer guests the opportunity to enjoy convivial outings and discover new local flavours and culinary talents. The hotel's 129 rooms and suites are all luxuriously appointed, and no hotel is complete without the obligatory spa offerings - Conservatorium Hotel Amsterdam's come in the form of the Akasha Holistic Wellbeing Centre. Separated into different areas titled Earth, Water, Fire and Air, the wellness centre offers calming yoga, Pilates, and meditation classes as well as a gym, generously proportioned pool, and numerous therapy rooms. The job of redesigning a hotel that has stood since the end of the 19th century was no easy task.

The building has stood as an icon of the city's architectural and cultural hub for well over a century, and any reworking of the interior and exterior had to adhere to three rules: respect the heritage of the original site, make the new Conservatorium as modern and energetic as its predecessor, and also create something that would be able to stand the test of another century of business in one of Europe's most creative, restless and occasionally lawless cities. The attention to detail is nowhere more visible than in the calibre of personalised service: one that always seeks to forecast a guest's needs and surpass expectations. The iconic building that once housed Amsterdam's premier music conservatorium has completed a sophisticated transformation into the city's most unique and fashionable hotel.

It combines luxury, lifestyle and heritage with a personalised level of service that is unrivalled. For epicureans, the hotel caters to every taste and the restaurant and bar areas are destinations in their own right for locals and international visitors alike. The Lounge, intimate and furnished with plush sofas and coffee tables, provides a sophisticated sanctuary ensuring a cosy living space for a relaxing break or afternoon tea. The Brasserie offers contemporary classics all day - including salads, sandwiches and seasonal plats du jour. Tunes Restaurant & Bar by Schilo offers local authentic dishes based on seasonally sourced products. The world of luxury hotels await George Akirov's next move, a design classic in the making.

Location: Conservatorium Hotel Amsterdam's prime location is ideal - deep in the cultural centre of the Museumplein, next to the Stedelijk Museum, Van Gogh Museum, Rijksmuseum, opposite the Royal Concertgebouw and parallel to the prestigious shopping district of P.C. Hoofstraat. Best of all, it's a mere 20 minutes away from Schiphol International Airport.