The rapid modernisation of the UAE reminds us of the temporal nature of the built environment yet image-maker, Hussain AlMoosawi, has committed his lens to capturing the ever-shifting landscape that surrounds him. His portfolio forms a visual index of the UAE’s minute and monumental changes and uniquely offers up an insider’s perspective from a country known to be inhabited by outsiders. We step into Hussain’s studio to discover his methodology and mission.

Hussain: I’m currently acting as the Editor-in-Chief of National Geographic Alarabiya Magazine but I would say that my career is a hybrid of design, media and photography.

I think my fascination with buildings began during childhood. I was partially raised in old Dubai, I think my surroundings sparked an interest in dense areas and the energies that they contain. In parallel, my walking habit – which I consider a form of therapy – contributed to my keen observation of urban details. A book that greatly influenced my street sensibilities is On Looking: A Walker's Guide to the Art of Observation by Alexandra Horowitz.

I actively document the UAE’s architectural heritage, through personal and commissioned projects. I consider myself to be a typologist - someone who studies types. I used to collect and study objects, but nowadays my practice revolves around documenting public spaces to better understand our evolving urban identity.

Photographing architecture and urban identities is an attempt to make sense of my built surroundings.

Hussain: Photographing architecture and urban identities is an attempt to make sense of my built surroundings. The first thing you learn in design school is that everything is designed. This means that someone had to take decisions to influence the things that we see and use. It’s these decisions that I'm preoccupied with - I’m interested in how these decisions manifest collectively in an urban space. Through the documentation of architecture, I’m attempting to understand how various design decisions have shaped a 50-year-old country.

My architectural obsession began in 2010 while I was living in Melbourne. I photographed the city extensively to better understand its visual character. I returned to the UAE in 2013 and spent several years observing our vernacular architecture; this process helped to form my initial understanding of the urban character of the Emirates. This immersion also involved producing a series of experimental projects - a process that represents “learning by doing”. By 2018, I was documenting the facades that populate the country with the aim of better understanding an important facet of our heterogeneous architectural heritage.

Since then I’ve defined my goal. My aim is to document all types of facades in the UAE, a project which I think will take me around a decade to complete.

...I was documenting the facades that populate the country with the aim of better understanding an important facet of our heterogeneous architectural heritage.

Hussain: Everything starts with a deep observation followed by the mapping of areas of interest. The more I photograph, the more I open up avenues that accelerate me toward other ideas, as I happen to encounter other subjects of interest when I’m actively taking photos. I cannot help but fully absorb the urban context in which I photograph.

I’ve been deeply impacted by the work of Bernd and Hilla Becher. They are known for pioneering typology as a form of photographic documentation and are particularly famous for documenting the fading industrial landscape in post-war Germany. As much as I’m inspired by their outcome, it’s their methodology and dedication to long-term documentation that struck me.

The city of Melbourne has also influenced my passion for urban documentation. The city is so vibrant, it temped me to photograph it to better know it. There I realised that I see the world as a designer and document it as a photographer.

The diversity in the cities that populate the UAE fascinates me. Each city – and generally each Emirate – has been master planned independently. This afforded each community a unique urban identity which we can trace back to the late 1960s, around the time when the country was going through its unification process. Based on these unique urban “templates”, each city had a different approach to development, despite generally adhering to similar regional influences before adopting the so-called international style.

Hussain: Given the context of my project, I try to avoid any form of bias towards a specific architectural style, however, I cannot help but admire the approaches used during the 1970s and 1980s. Styles of these eras adhered to both modernist ideals and incorporated elements that relate to our regional heritage. This approach also happened to be functional in terms of controlling how light flows into a building in a hot climate. I believe that many connect to this style because it has a strong and relatable personality. Not all buildings from that era are aesthetically beautiful, but they all have a sense of personality. Some contemporary buildings go under our radar because they lack this sense of aura that commands attention.

I want everyone to pay attention to their surroundings, even in environments that they might not like. Most people experience the UAE by car, which means that they are missing out on the details that can be discovered when moving by foot. My practice demands that I seek out unseen urban wonders. I might have an eye, trained to capture details, but everyone can discover their own gems. I encourage everyone to look around and discover cities on their own terms.

Hussain: These days we all chase instant rewards but my advice to anyone that has a passion project is to give it time and dedication. By doing this you stretch the process of joy and create greater outcomes. This commitment will make you and your project inseparable—everything you do then will be seen through the lens of what you're passionate about.

In addition to my personal projects, I also work with local organisations that aim to preserve the UAE’s architectural heritage. One of my favourite projects is In Search of Spaces of Coexistence: An Architect's Journey, a publication commissioned by the Ministry of Culture and Youth in 2019 to highlight the significance of places of worship and community meeting points in the UAE.

I regularly exhibit my ever-growing collection of works at the Gulf Photo Plus gallery in Alserkal Dubai as well as on my website and on my Instagram. 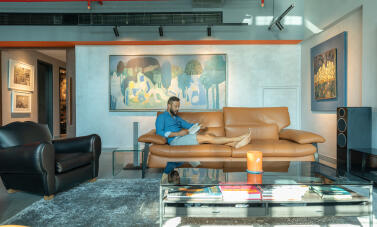 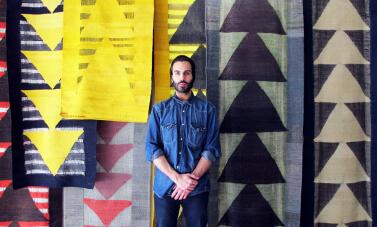 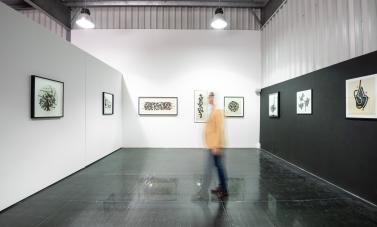 We catch up with the artist prior to his exhibition 'Letters of Love II' at Mestaria Gallery starting today.