Dubai’s Theatre of Digital Art (ToDA) invites guests to an evening of contemporary opera on 23 July 2022. The venue promises an evening of “deep voice, pensive sound and 360° art” pioneered by Mezzo-Soprano Yana Mann and visual artist Shaun Stamp. During the performance that merges art, performance, technology and voice Yana will recite Poemas De Bar Op. 12 and Arias Florentinas Op. 15 - two cycles composed by Julian De La Chica. The compositions - considered to be both confessional in nature and dark in character - charter extremities in emotion explored at the edges of love and death. Artist Shaun Stamp offers the audience a digital immersion into his response to these cycles through a series of bio illumination artworks.

Fresh off the back of her recent performance at New York’s Carnegie Hall, we sit down with Yana to delve into her life in performance and to discover what we can look forward to at the ToDA concert.

Yana: I was born in Saint Petersburg, Russia, and fell for music and theatre at an early age. My first solo performance was when I was 7 - this led to an immersion that spanned decades.

At the age of 12 I auditioned at the Mariinsky opera house in Saint Petersburg. I performed among the world's most talented singers, conductors, and musicians. That was when I realised that I wanted a career as a singer. I then went on to study at St. Petersburg Rimsky-Korsakov College of Music before moving to Moscow to study at the Tchaikovsky Academic Music College at the Moscow State Conservatory.

Yana: 2014 saw me relocate to Dubai with my family but I continued my professional training in London. I would frequently fly to the city for private sessions with the talented soprano, Sandra Ford. Over the years Sandra became a close friend of mine - we speak on the phone and she often stays with me in Italy and Dubai.

I started to sing when I was very young but I was not just focused on opera, I wanted to experience different genres from rock to pop and electronic music. I joined a metal band when I was 16. Later I was recording pop yet I always returned to classical music and vocal training.

During the pandemic, I was virtually introduced to New York-based composer and producer Julian de La Chica.  We decided to work on an album together. The album, Poemas De Bar Op.12 received significant international attention.

February 2022 was an essential moment in my career. I had my solo debut at Carnegie Hall, New York. I performed my album and the music dedicated to me by Julian in unison with him. This September I’m releasing a club track with the french DJ, Demayä, together with a music band Arkadyan remixed by Jean Claude Ades entitled: “Esperanza”. The track has been played in many countries,  at festivals, and in clubs, including Scorpios in Mykonos.

Yana: When I moved to Dubai, I found myself in a completely different professional environment. It was challenging - I had to rethink and reflect upon what I wanted to do with my career. I wanted to create a fusion, a contemporary version of my classical way of singing. I spent several years learning to record and produce music which opened up new possibilities.

I love the UAE. I've been fortunate enough to meet so many interesting people from all over the globe which inspired me to set up my own production company, Silent Theme Production. Through this platform, I have produced music videos with creatives from around the world.

I'm always deeply inspired by the artists that I work with. The energy that we create transforms a shared vision. It’s the best way to learn more, to push personal and disciplinary boundaries and create unlimited possibilities in the making of music and art.

Yana: I discovered Shaun and his art through mutual friends in Dubai. One of them sent Shaun a video of me singing and shortly after he contacted me to suggest that we collaborate on a photographic artwork, a portrait using his zodiac flower theme. We met and discussed his vision, his philosophy and the mutual connections that we perceive between art and music. I was drawn to the vulnerability and darkness of his art.

Shaun had previously collaborated with a musician for a photographic series, he captured a harpist using a contemporary movement by Canadian composer Caroline Lizzotte. I was interested in experimentation and extending the limitations of music through visual art. For me working together felt like a very natural and fluid evolution as we share a similar worldview. It was crucial that he could reflect upon and appreciate music as much as art so that we could realise our exploration to the fullest.

For our collaboration at ToDA Shaun responded to my performance with a bio-illumination photography series displayed in full 360 degrees which offers deep immersion for the audience. The illuminated works feature glowing plants that change status over time, suspended in what feels like deep space. The result is an atmosphere that feels celestial and eerie at once.

We’ve also collaborated on two photographic sessions; you can encounter other still photographic works by Shaun at TODA.

As an artist based in the UAE it's important for me to create a cultural bridge that connects talents around the world. During this performance, I am for example introducing a UAE audience to a new style of minimal classical Latin American-inspired music in unison with the vision of a British contemporary artist.

You can discover more about ToDa’s Contemporary Opera Night and book tickets here.

More: Art Interviews In the studio 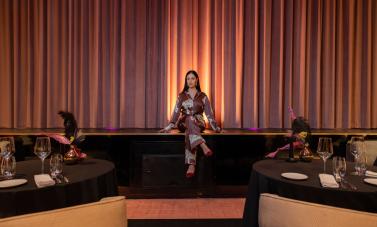 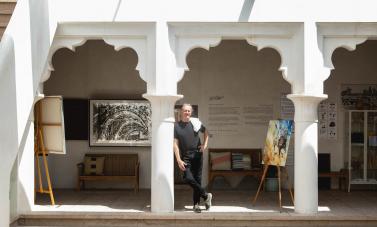 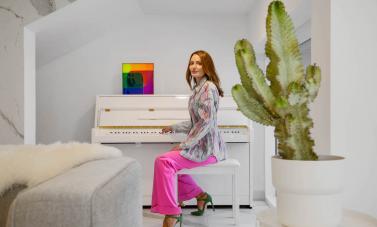